In an interview with the Vietnam Investment Review (VIR), our GBA Chairman, Mr. Alexander Götz, together with other representatives from German companies, Mr. Guru Mallikarjuna, Managing Director of Bosch Vietnam and Mr. Lukas Schoeneck, CEO of thyssenkrupp Industrial Solutions Vietnam and GBA Board Member have expressed their delight at the ongoing enforcement of the EU-Vietnam Free Trade Agreement, which for the past year has opened up prospects for them to capitalise on in Vietnam.

Mr. Alexander Götz told VIR: “The agreement (EVFTA) is a great accomplishment. Vietnam is already the biggest trade partner of Germany in ASEAN and we expect a strong increase of investments, fostered by the removal of trade barriers.” 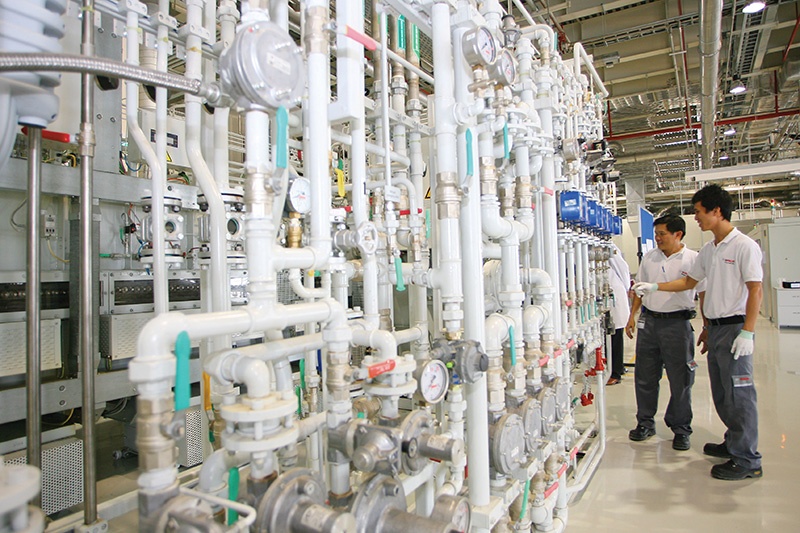 German investors have spoken of their delight at the ongoing enforcement of the EU-Vietnam Free Trade Agreement, which for the past year has opened up prospects for them to capitalise on in Vietnam.

Alexander Goetz, chairman of the German Business Association (GBA) told VIR, “The agreement (EVFTA) is a great accomplishment. Vietnam is already the biggest trade partner of Germany in ASEAN and we expect a strong increase of investments, fostered by the removal of trade barriers.”

However, over the last year, the number of new investments from German companies in Vietnam remained rather low. This was mainly caused by the lockdowns in Germany as well as the very complex procedure for entry permits, which are required by Vietnamese authorities.

Goetz noted that the general interest in Vietnam as a new market is huge and that many investors are waiting for scheduling a visit under a more liberal travel policy.

“Overall market conditions in Vietnam are still attractive for companies in manufacturing, and the EVFTA is an additional benefit. Many German companies are following a China+1 strategy, and Vietnam is one of the top three locations to extend a footprint in Asia,” Götz said.

Guru Mallikarjuna, managing director of Bosch Vietnam, said, “Despite the widespread pandemic and the detrimental impacts it imposed on the economies of both Vietnam and the EU, we believe that the first year of the EVFTA has demonstrated a promising start.”

Nevertheless, tariffs on most trading merchandises will only be eliminated completely after 5-7 years.

“The EVFTA is likely to accelerate Vietnam’s endeavour of implementing institutional reforms, which is imperative to help the country comply with international standards, especially in areas like the environment, investment protection, labour standards, and intellectual property, from which the European business community, including German companies, will greatly benefit,” Mallikarjuna explained.

During the first year of the deal, the government has exerted great efforts to streamline administrative procedures, investing in public governance and the labour force’s competitiveness, as well as completing legal provisions to support compliance with international standards.

“However, much work still needs to be done. Since trade and investment are closely linked, an early ratification and implementation of the EU-Vietnam Investment Protection Agreement (EVIPA) is much needed as it will be of great importance to promote investment in high-tech and innovative industries,” Mallikarjuna said.

Lukas Schoeneck, CEO of thyssenkrupp Industrial Solutions Vietnam, also recognised the major opportunities that arise from the reduction of tariffs and administrative hurdles. However, for some of the goods that are interesting to thyssenkrupp, tariffs are yet to be reduced.

“The local legal framework will be adapted to enhance transparency, for example in tender processes. Our customers and suppliers will also need to adapt themselves, which will create a more favourable environment for us to do business here. Overall, I am very positive about the beneficial impacts on trade and investment activities between Europe and Vietnam,” Schoeneck said.

Vietnam is the centre of thyssenkrupp’s plans to serve not only the local but also regional markets in Southeast Asia. The company is one of the few ones that have their regional headquarters located in Vietnam. Schoeneck is sure that more companies will follow. “Currently, we are looking into the opportunities brought by the EVFTA, but we tend to have a holistic view,” he said. “As a part of a large conglomerate, there are different particular interests that come together. In some cases, Vietnam is interesting as a market, and in other cases we look at it more from a supply chain perspective. The EVFTA will have a positive effect on both sides,” he added.

As of August 20, German investors had injected $2.25 billion into 405 projects in Vietnam, making it one of top 20 foreign investors in the country, according to data by the Ministry of Planning and Investment. Big names like Bosch, Siemens, SAP, Mercedes-Benz, B. Braun, BASF, Bayer, and Deutsche Bank have set up their presence in Vietnam.

During the pandemic, several German have been ramping up expansion plans in Vietnam. German technical adhesive tape maker tesa announced its plan to build a $65-million factory in Vietnam in an effort to expand its production from 2023. The new facility will cover over 70,000 square metres at DEEP C Industrial Zones in the northern port city of Haiphong.

Meanwhile, German developer wpd AG in collaboration with Singapore’s Levanta Renewables is planning the Kon Plong onshore wind energy project in the Central Highlands province of Kontum. The market entry in Vietnam is part of the expansion of the German developer’s activities in the Asia-Pacific region.

Besides manufacturing, GBA chairman Goetz said that sustainable energy and infrastructure solutions are segments with a very high potential for future investments in Vietnam. Many German companies are market leaders in those fields and can support Vietnam.

“With a growing middle class, we will see more retail brands which will start operations in Vietnam and bring high-quality goods from Germany,” he said. “One critical condition to attract such investment is the stable and transparent preparation and communication of regulations to ensure long-term planning of business operations and strategies. During the recent crisis, we have seen very inconsistent policymaking, which is very discouraging for German investors.”

To maintain the attractiveness to German investors, Götz proposed that it is important to retain favourable policies and regulations for existing and new companies entering the market. Recently, there have been some adjustments in different laws, which had a rather negative impact on businesses. One example is the new decree on the issuance of work permits, which makes it very difficult to employ foreign experts.

“To ensure a stable quality level of services, many firms have to rely on foreign personnel to guide their production sides in Vietnam. We hope the authorities are quickly removing such unnecessary requirements and keep an open dialogue with business associations to exchange ideas and problems,” Götz said.

Mallikarjuna from Bosch said that Vietnam has a favourable economic outlook for German investors, especially with advantages for further industrial and high-tech development, such as the availability of a competitive labour force and increasing focus on capacity training and development.

He stressed that the EVFTA and the EVIPA will directly benefit German groups to accelerate and scale up investments in country.